Born Humphrey DeForest Bogart on Dec. 25, 1899 in New York City, he was the eldest child and only son of Belmont and Elizabeth Bogart.

Bogart enjoyed a somewhat privileged childhood, as his father was a prominent surgeon and his mother a classically-trained commercial illustrator. With a permanent home on New York’s Upper West Side, the well-to-do family also owned an upstate vacation property on Canandaigua Lake.

Both of his parents were exceptionally busy and highly focused on their careers, and they expected the same of their son.

Bogart was enrolled in several private schools from an early age, eventually being accepted at the prestigious Exeter Academy in Andover, MA. Their hopes for him to attend Yale University were dashed, however, when Bogart  was expelled from Exeter for reasons that remained unclear.

In 1918, the adventurous young man, enamored with the sea and filled with romantic notions of war, enlisted in the U.S. Navy aboard the U.S.S. Leviathan, where he injured his upper lip, resulting in his famous, character-enhancing scar. 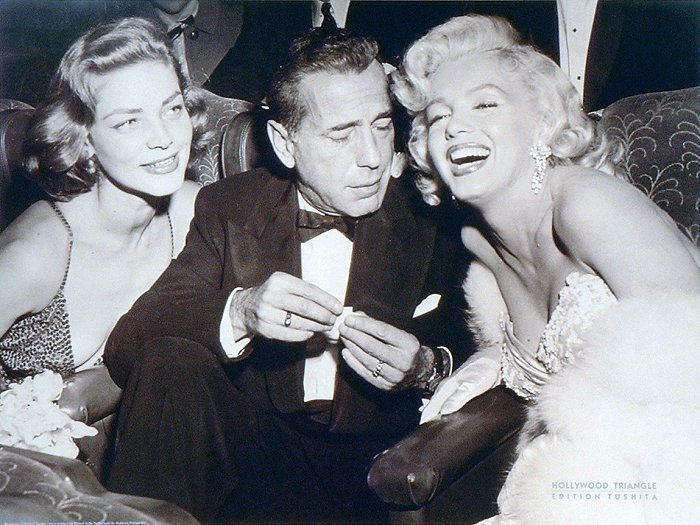 Having acquitted himself admirably during his naval service, Bogart returned to New York where he worked a short series of jobs before a family connection gave him his first contact within the theater world.

Having struck up a friendship with playwright and actress Alice Brady, he was hired by her father, film and theater producer William A. Brady, for whom he worked for a time in various positions.

From 1922 to 1935, he appeared in dozens of stage productions. Early on, he met and soon married actress Helen Menken, although this first union would end amicably little more than a year later. Another marriage to a stage actress, Mary Philips, followed in 1928. 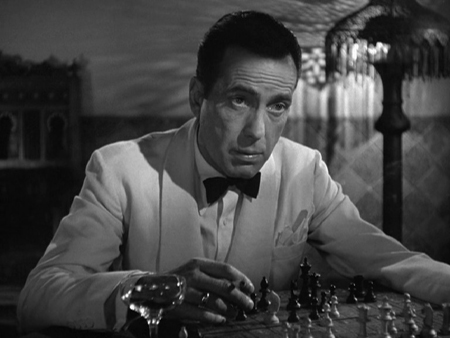 After a few film shorts alongside the likes of Helen Hayes, Bogart made his feature film debut with a supporting role in «Up the River» (1930).

As Bogart struggled with the increasing dissatisfaction of his film work, he entered into a third marriage in 1938 with Mayo Methot, an actress he had met through mutual friends. She was a mercurial woman with a serious drinking problem and prone to fits of jealousy. So fractious was their marriage that at one point the press began to refer to the couple as the «Battling Bogarts.»

Having gained newfound respect ,Bogart reteamed with director Huston and co-stars Astor and Greenstreet for the World War II espionage thriller «Across the Pacific» (1942). That same year Bogart delivered his legendary performance as expatriate nightclub owner Rick Blaine in «Casablanca» (1942).

Just like the rest of the world, Hollywood’s attention was on World War II in the early 1940s, and Bogart’s film output was no exception. Movies of the period included the naval adventure «Action in the North Atlantic» (1943), the desert tank action piece «Sahara» (1943), and «Passage to Marseille»
Their onscreen collaboration proved instantly popular and Bogie immediately paired again with Bacall and director Hawks for «The Big Sleep» (1946).
In the years that followed World War II, America was swept up in wide spread anti-Communist fervor, spurred by a distrust of its former ally, the Soviet Union. Led by Huston and other Hollywood luminaries, Bogart, Bacall and several other film stars formed a group called the Committee of the First Amendment which traveled to Washington D.C. to protest the hearings being held by the House of Un-American Activities Commission (HUAC), claiming that it was unfairly harassing many actors and artists.
Released under his Santana Productions, Bogart next appeared in the films «Knock On Any Door» (1949), «Tokyo Joe» (1949), and director Nicholas Ray’s «In a Lonely Place» (1950).

Bogart’s last collaboration with his friend John Huston came in the form of «Beat the Devil» (1953), a sly parody of previous Huston classics, in particular «The Maltese Falcon.» Following a group of greedy, unscrupulous gold diggers chasing an unattainable treasure in a Kenyan seaport, it was written by Truman Capote and featured the likes of Jennifer Jones, Gina Lollobrigida and Peter Lorre.
With his health now beginning to fail, although he refused to seek treatment, Bogart continued with his always impressive film output. He vied for the attention of Audrey Hepburn with playboy brother William Holden in director Billy Wilder’s romantic-comedy «Sabrina» (1954), and starred opposite Ava Gardner in «The Barefoot Contessa» (1954). He played an escaped convict making up for a shady past in the comedy-drama «We’re No Angels» (1955), a man impersonating a priest in the romantic-adventure «The Left Hand of God» (1955), and a ruthless prison in the thriller «The Desperate Hours» (1955).

Bogart’s final role was that of a sardonic sports writer-turned-boxing promoter in the sports noir «The Harder They Fall» (1956).

Friends and fellow stars Spencer Tracy and Katherine Hepburn were a few of the last people to see the greatly diminished movie icon in his final days. Shortly after his 57th birthday, Humphrey Bogart died after slipping into a coma on Jan. 14, 1957 at his home in the Holmby Hills area of Los Angeles. He left behind Bacall and two small children, Stephen, a son, and Leslie, a daughter.

In the decades that followed his death, Bogart inarguably became a worldwide film icon, possibly the biggest outside of Marilyn Monroe and James Dean. He remained one of the most quoted actors in history.