Marilyn Monroe was born on June 1, 1926, in the Los Angeles County Hospital.

Norma Jeane became one of Blue Book’s most successful models; she appeared on dozens of magazine covers. Her successful modeling career brought her to the attention of Ben Lyon, a 20th Century Fox executive, who arranged a screen test for her. Lyon was impressed and commented, “It’s Jean Harlow all over again.

Following her idol Jean Harlow, she decided to choose her mother’s maiden name of Monroe. Several variations such as Norma Jeane Monroe and Norma Monroe were tried and initially “Jeane Monroe” was chosen. Eventually, Lyon decided Jeane and variants were too common, and he decided on a more alliterative sounding name. He suggested “Marilyn”, commenting that she reminded him of Marilyn Miller.

The actress’s first movie role was an uncredited role as a telephone operator in The Shocking Miss Pilgrim in 1947, starring Betty Grable.

She won a brief role that same year in Dangerous Years and extra appearances in the western film Green Grass of Wyoming starring Peggy Cummins and the musical film You Were Meant for Me starring Jeanne Crain and Dan Dailey. She also won a three-scene role as Betty in Scudda Hoo! Scudda Hay!, but before the film’s release her part was cut-down to a brief one-line scene.Monroe’s latest three films wouldn’t be released until 1948, which was months after her contract had ended in late 1947.

She starred in the low-budget musical Ladies of the Chorus (1948).

She had a small role in the Marx Brothers film Love Happy (1949). Monroe impressed the producers, who sent her to New York to feature in the film’s promotional campaign.

Monroe had brief roles in three films: A Ticket to Tomahawk, Right Cross, and The Fireball.

In 1951, Monroe enrolled at University of California, Los Angeles, where she studied literature and art appreciation. Afterward Monroe had minor parts in four films. In March 1951, she appeared as a presenter at the 23rd Academy Awards ceremony.

She made her first appearance on the cover of Life magazine in April 1952, where she was described as “The Talk of Hollywood”.

Four films in which Monroe featured were released beginning in 1952. She had been lent to RKO Studios to appear in a supporting role in Clash by Night, a Barbara Stanwyck drama, directed by Fritz Lang.  Released in June 1952, the film was popular with audiences, with much of its success credited to curiosity about Monroe, who received generally favorable reviews from critics.

Monkey Business, a successful comedy directed by Howard Hawks starring Cary Grant and Ginger Rogers, was released in September and was the first movie in which Monroe appeared with platinum blonde hair.

In O. Henry’s Full House for 20th Century Fox, released in August 1952, Monroe had a single one-minute scene with Charles Laughton, yet she received top billing alongside him and the film’s other stars, including Anne Baxter, Farley Granger, Jean Peters and Richard Widmark.

Darryl F. Zanuck considered that Monroe’s film potential was worth developing and cast her in Niagara, as a femme fatale scheming to murder her husband, played by Joseph Cotten.

She was assigned to the western River of No Return, opposite Robert Mitchum. 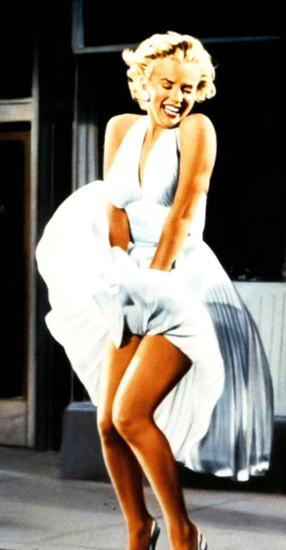 In late 1953 Monroe was scheduled to begin filming The Girl in Pink Tights with Frank Sinatra. When she failed to appear for work, 20th Century Fox suspended her.

Monroe and Joe DiMaggio were married in San Francisco on January 14, 1954. They traveled to Japan soon after, combining a honeymoon with a business trip previously arranged by DiMaggio. Returning to Hollywood in March 1954, Monroe settled her disagreement with 20th Century Fox and appeared in the musical There’s No Business Like Show Business. The film failed to recover its production costs and was poorly received.

One of Monroe’s most notable film roles was shot in September 1954, a skirt-blowing key scene for The Seven Year Itch on Lexington Avenue at 52nd Street in New York City.

Joe DiMaggio was reported to have been present and infuriated by the spectacle.After a quarrel, witnessed by journalist Walter Winchell, the couple returned to California where they avoided the press for two weeks, until Monroe announced that they had separated. Their divorce was granted in November 1954.

The first film to be made under the contract and production company was Bus Stop directed by Joshua Logan.

Bus Stop was followed by The Prince and the Showgirl directed by Laurence Olivier, who also co-starred.

With Miller’s encouragement she returned to Hollywood in August 1958 to star in Some Like It Hot. The film was directed by Billy Wilder and co-starred Jack Lemmon and Tony Curtis.

Monroe was acclaimed for her performance and won the Golden Globe Award for Best Actress – Motion Picture Musical or Comedy.

Monroe’s health deteriorated during this period, and she began to see a Los Angeles psychiatrist, Dr. Ralph Greenson.

In 1962, Monroe began filming Something’s Got to Give, which was to be the third film of her four-film contract with 20th Century Fox. It was to be directed by George Cukor, and co-starred Dean Martin and Cyd Charisse. She was ill with a virus as filming commenced, and suffered from high temperatures and recurrent sinusitis.

On May 19, 1962, she attended the early birthday celebration of President John F. Kennedy at Madison Square Garden, at the suggestion of Kennedy’s brother-in-law, actor Peter Lawford. Monroe performed “Happy Birthday” along with a specially written verse based on Bob Hope‘s “Thanks for the Memory“. Kennedy responded to her performance with the remark, “Thank you. I can now retire from politics after having had ‘Happy Birthday’ sung to me in such a sweet, wholesome way.”

Monroe returned to the set of Something’s Got to Give and filmed a sequence in which she appeared nude in a swimming pool. Commenting that she wanted to “push Liz Taylor off the magazine covers”, she gave permission for several partially nude photographs to be published by Life. Having only reported for work on twelve occasions out of a total of 35 days of production,  Monroe was dismissed. Monroe was replaced by Lee Remick, and when Dean Martin refused to work with any other actress, he was also threatened with a lawsuit.

On August 5, 1962, LAPD police sergeant Jack Clemmons received a call at 4:25 am from Dr. Ralph Greenson, Monroe’s psychiatrist, proclaiming that Monroe was found dead at her home in Brentwood, Los Angeles, California.[139] She was 36 years old. At the subsequent autopsy, eight milligram per cent of Chloral hydrate and 4.5 milligram percent of Nembutal were found in her system, and Dr. Thomas Noguchi of the Los Angeles County Coroners office recorded cause of death as “acute barbiturate poisoning,” resulting from a “probable suicide.” Many theories, including murder, circulated about the circumstances of her death and the timeline after the body was found. Some conspiracy theories involved John and Robert Kennedy, while other theories suggested CIA or Mafia complicity. It was reported that the last person Monroe called was the President.

On August 8, 1962, Monroe was interred in a crypt at Corridor of Memories #24, at the Westwood Village Memorial Park Cemetery in Los Angeles.

Monroe had three marriages, all of which ended in divorce. The first was to James Dougherty, the second to Joe DiMaggio, and lastly to Arthur Miller.